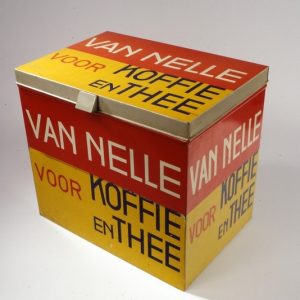 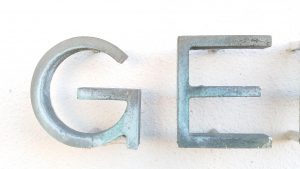 The Van Nelle workers offered a text in metal in memory of the relocation of the Van Nelle factory in 1930. 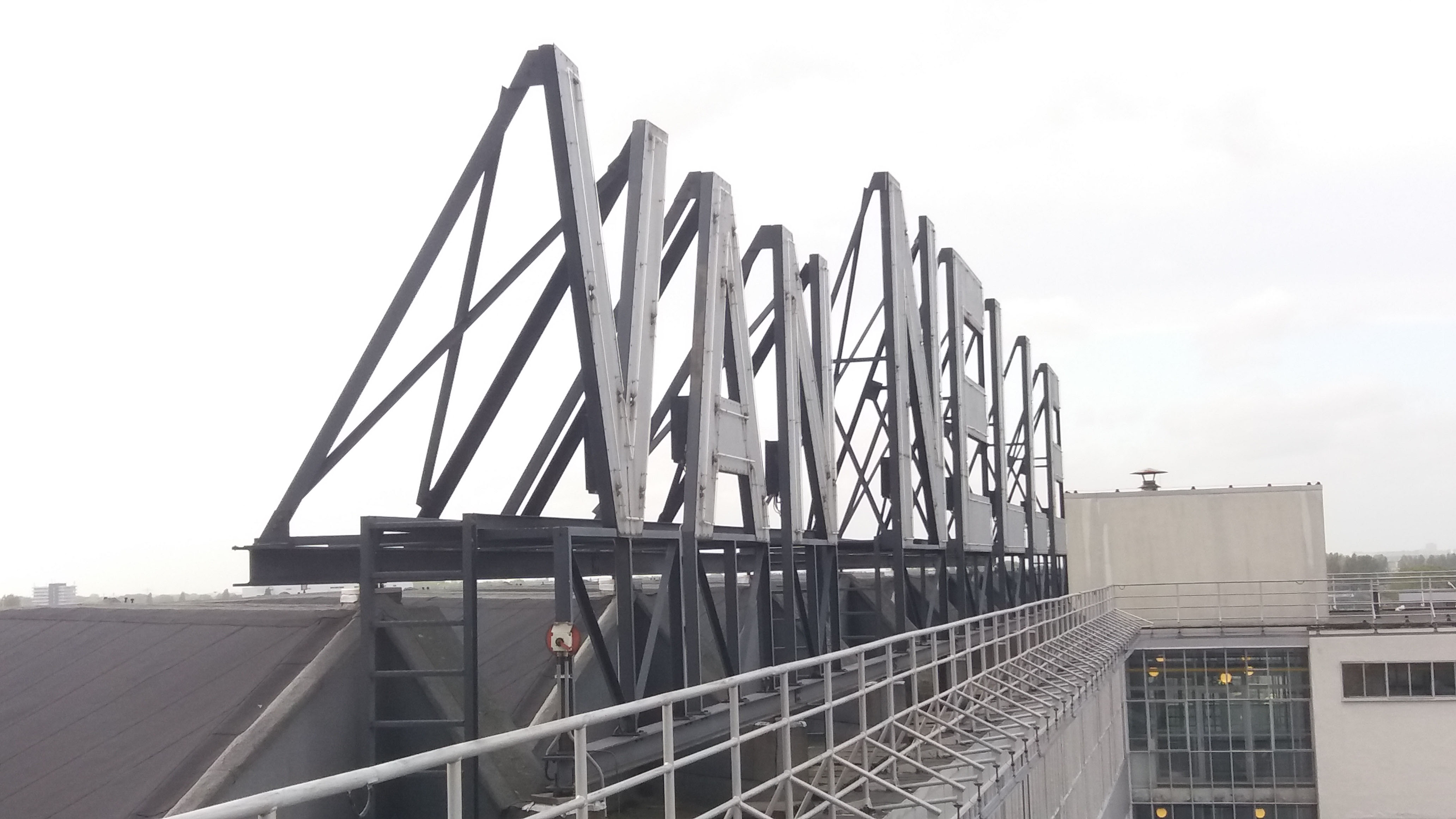 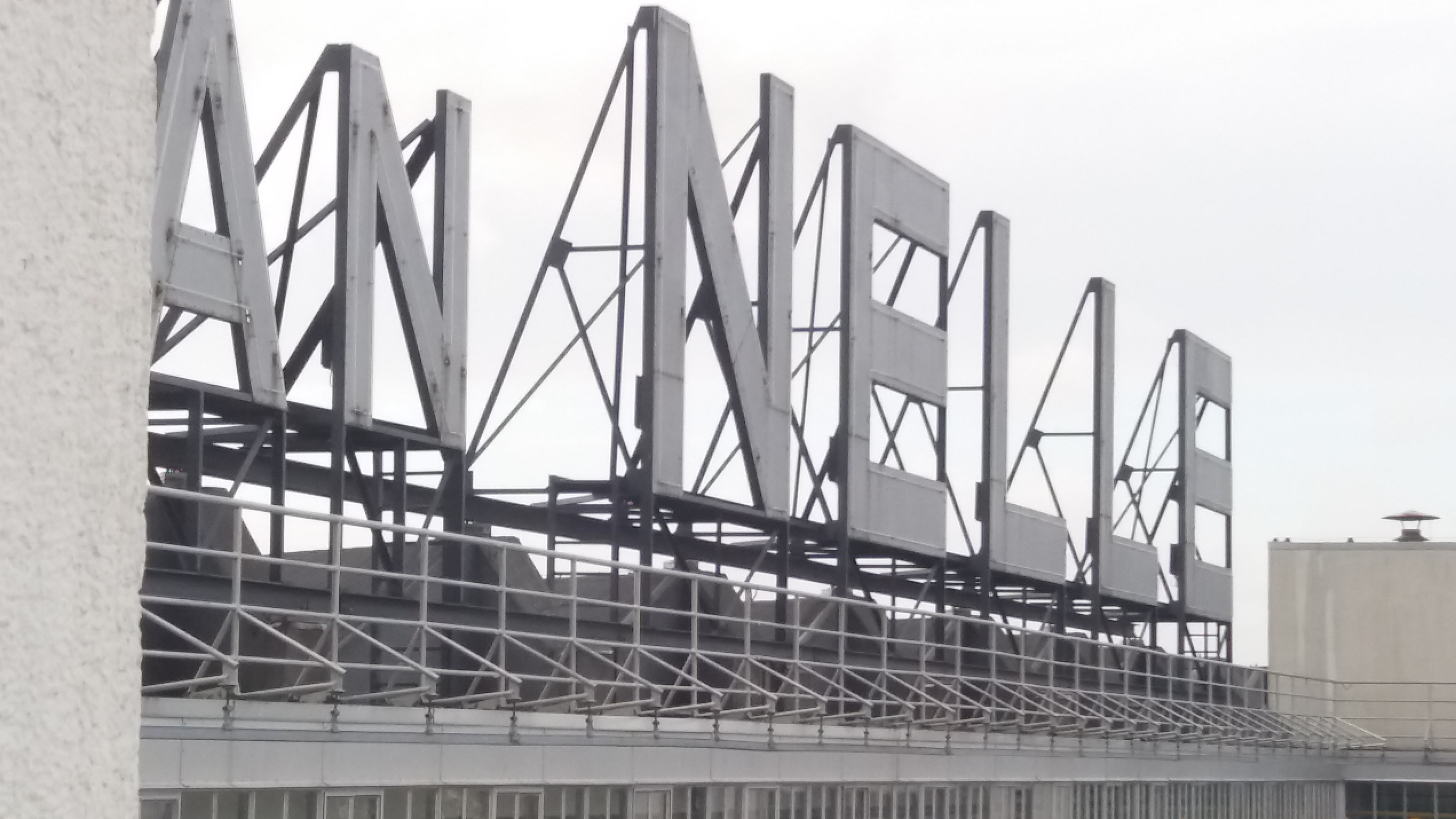 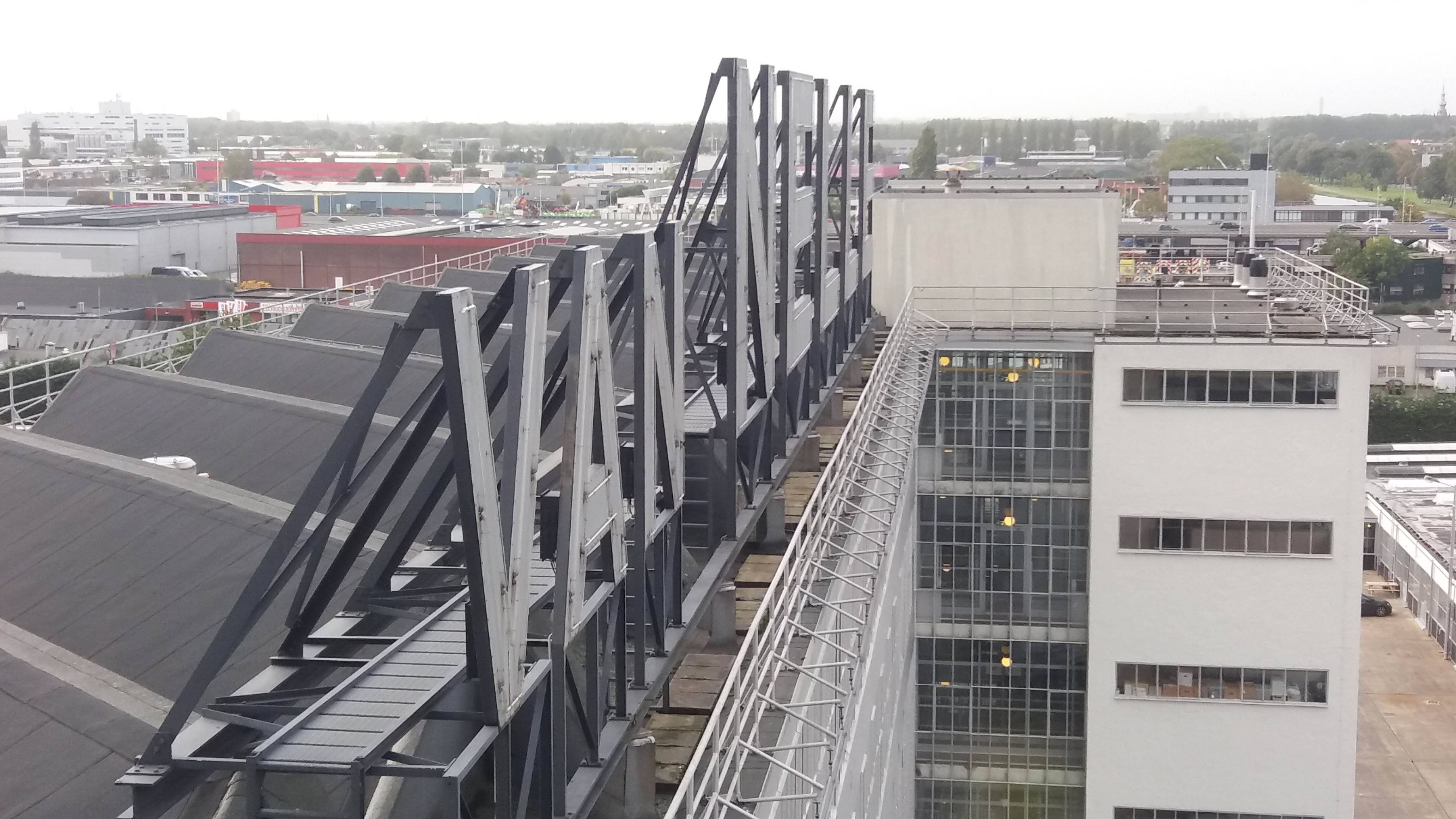 In 1926, at the start of the construction of the new Van Nelle factory, located in the meadows on the Schie outside of Rotterdam, it had become the leading firm in coffee, tea and tobacco in The Netherlands.

Building patron Kees van der Leeuw
The Van Nelle factory, renowned example of the Dutch Modern Movement, was initiated by Kees van der Leeuw (Rotterdam, 1890-1973) one of the three bothers Van der Leeuw, owners of Van Nelle. Kees van der Leeuw was an extraordinary man with vision, organisational skills, creative and with considerable means, perfectly at ease in his time. As soon as he was appointed director in 1913, he started thinking about a new factory, made a memorandum with program requirements “New Factory Grounds”, managed to get it approved in the Van Nelle board and bought the first lot of land.

Context
He was involved in the most important financial, artistic, cultural and spiritual institutions in NL: The Kring, De Opbouw, and was a close friend of Krisnamurti, the influential spiritual leader of the modern theosophical movement, of the Bauhaus Director Gropius, of Le Corbusier, to name just a few. He travelled the world, had influential connections everywhere, flew his own plane and also was a life-long friend of Jacques Jongert, the graphic designer and aesthetic consultant of Van Nelle from 1920 until 1939.

Advertising & Neon
The firm has a long tradition in advertising and considered it always very important. Advertising costs were first recorded in 1888: around 1900 10.000 Dutch guilders (approx. 4.500 Euro) were spend on advertising and at the end of 1920 this is was already 950.000 Dutch guilders. Van Nelle products were used in each and every household and the Van Nelle signs were on display even in the smallest shop and in the smallest village in NL.

In 1920, Van Nelle placed one of the first illuminated advertising signs in the NL on its factory at the Leuvenhaven in Rotterdam – a moving neon sign of a pot pouring out coffee with the text: Drink Van Nelle’s koffie. Proeven is koopen (Drink Van Nelle’s coffee. Tasting is buying.), plus a neon sign on top of het Witte Huis, a very well-chosen place, as this was the tallest office building in Europe at that time.

The Dutch newspaper NRC published details of the sign on the factory at Leuvenhaven: “…the largest of its kind in Europe, and in technical terms an achievement of particular significance… This sign is composed of Philips Neon tubes. The lettering and frame contain no fewer than 600 metres of glass tubing, filled with the inert gas Neon. The sign is positioned at a height of 65 metres. The iron structure, 20 m wide and 20 m high, weighs 16.000 kg. The letters are two metres tall. The total power consumption, in intermittent use, is less than 7.5 watt. This sign is entirely of Dutch manufacture.” ‘Lichtreclame’ in NRC 1926, Rotterdam Municipal Archives, Van Nelle, in.nr. 2062.

Van Nelle sign
In 1918, Jacques Jongert (Enge Wormer, 1883-1942) decided to move to Rotterdam after he was appointed head teacher of Applied and Decorative Arts at the Academy in Rotterdam. Besides, he had his own design practice where his students, his daughter and son helped him in busy times. In that period, he was invited by Van Nelle to design an add. It was a large Van Nelle sign painted on a wooden building fence. Jongert had recently taken position in the discussion about publicity, and unlike his good friend R.R. Holst who was of the opinion that publicity was a bit vulgar, thought that publicity should be functional, not sentimental, non-figurative, and at the same time artfully and artisanal, adhering to the ideal that everyone needs good design.

Van der Leeuw surely also knew Jongert’s work for the wine company Oud (yes, family of the architect JJP Oud) and for Cochius, the avant-garde director of Leerdam glass factory. Both idealists, Jongert and Van der Leeuw participated in the establishment of the Volksuniversiteit Rotterdam (a school for adult education, since most of the workers in the port of Rotterdam never received proper education). Since 1916, Jongert designed posters, a monthly magazine and promoted theosophical courses and gave lectures while Van der Leeuw held weekly meetings at his house to organize everything.

The cooperation between Jacques Jongert and Kees van Nelle is a fine example of the work of artists for the new, modern industry of the 1920s. Kees van der Leeuw looking back in the article “Building patron and architect” in Bouwkundig Weekblad 1962, no. 17, p. 346-354, mentioned that [he] “became passionately interested in the manifestation of building and designing in every field. This interest was increasingly put into practice and resulted in an intensive cooperation with designers and architects, among whom Jac. Jongert (packaging and advertisement designer at Van Nelle), De Bazel, Brinkman Sr., Van der Vlugt, Van den Broek, Elling, and others as well as contacts with different groups: Opbouw, de Acht, CIAM and others.” In the so-called “travellers meetings”, regular meetings of the head salesmen and members of the firm, advertisement strategies were discussed. However, Jan Jongert did not attend these meetings, and Kees van der Leeuw was not always present either. More research need to be done to find out about the follow up of these meetings.

Van Nelle publicity
As mentioned above, the technique of small packaging was new (brother Koos van der Leeuw brought this idea back from his travels to the US), and rapidly growing. Jongert was asked to make the designs for these packages. Furthermore, he designed what we now consider the company’s identity: posters, stands, tins, enamelled plates, shop displays, labels, painted walls, and also advertising signs for shops, for walls, for boats/trucks for Van Nelle delivery, brochures, agendas, many, many advertisements for papers, and neons. To guarantee uniformity, he made two Van Nelle letter families. (Published in N.J. van de Vecht, Onze lettertekens en hun samenstelling, Rotterdam, 1930.)

Van der Leeuw favoured a clear and functional design for the factory and for all publicity. It is amazing that in the memo he wrote to convince the board to build an ultramodern factory, he also considered shaping ‘the image’ of the factory. He wrote, in December 1915 already: “Take also into consideration the factory as a way to make publicity. A factory, on a very large site, spaciously built, visible from different sides and situated along the large train track Rotterdam/Amsterdam, will have much more publicity impact than a factory with a façade of 60 to 80 meters located at Oost-Zeedijk. [The other location they were thinking of. MvdB] If in addition we make modern accommodations like housing for workers, sport facilities, a garden etc: our ‘standing’ as factory will be completely different from the actual one.”

Jongert’s first designs were still decorative but gradually, after 3 years and influenced by Van der Leeuw was developed the typical Van Nelle style: functional, simple, using primary colours and sans serifs. Both Jongert and Van Nelle were convinced that art could improve the quality of life and making art for daily use could make life of everyone more beautiful. If is fascinating to see Jongerts work evolve from traditional decorative design – look at his beautiful labels for the producer of liquors and syrups, Wed. G. Oud – to the functional neons and famous clear enamelled plates and tobacco tins in primary colours.

Drawings and sketches of the Van Nelle sign
The first appearance of a neon sign is a presentation drawing by (probably) Mart Stam, who assisted Van de Vlugt, with the letters TABAK, KOFFIE, THEE, on the side facades of the three factory buildings dated November/December 1926. A second appearance of a Van Nelle neon sign can be found on a Brinkman & Van der Vlugt blueprint dated February 1927. It is a rough sketch of the letters tabak, koffie, thee, in sans serif, undercast which is very unusual for Jan Jongert. So I think this is a quick architectural sketch by Van der Vlugt, equally spaced, sketched on a print out of the main façade. Another print, “Facades and Sections” dated March 1929, shows the main façade, without sign on the main façade but with the sign ERVEN WED. VAN NELLE, curved, on the low, rounded entrance building. Next and last drawing is also a presentation drawing, maybe used for publication purposes, a clean line drawing with the letters VAN NELLE, all at the right place. Unfortunately, this drawing is not dated nor signed. (All drawings are from the Rotterdam City Archives.) Nor on these early drawings, nor on the photos made around 1930, when the factory was widely published in NL and abroad, a sign is placed on the façade facing the railway. The first time this sign appears is on an aerial photo taken in 1993.

The firm who is maintaining the neon signs at the actual Van Nelle Ontwerpfabriek, Vendeloo Lichtreclame, claims that both signs are still original.

Although Jacques Jongert’s work for Van Nelle was very successful and guaranteed him a good income – Jongert bought a beautiful villa in Rotterdam for his family during the crisis in the 30-ties – he never gave up his own studio and kept on teaching and readjusting the curriculum of the Academy to the changing times. He kept on making posters, stationaries, publicity materials for other firms as well as free experimental work. Unfortunately, his studio and his entire archive were destroyed during the bombing of Rotterdam in 1940, so large part of his work will remain undisclosed for ever.

Architecture
In 1929 when the factory was gradually finished, employees started to work in the factory. In 1930 they were all relocated. Undoubtedly, a grand festive opening was planned somewhere in the summer of 1930 but both father and brother Van der Leeuw died shortly after each other in august 1929 and march 1930, respectively; a grand opening must have been considered inappropriate.

Many people were invited to the factory, many excursions were organised, and publications and advertisements followed. The newspaper Algemeen Dagblad writes in an article on 18-11-1930 that Behne, Breuer, Gropius, Van Loghem, Van Eesteren, van Tijen, Rietveld en Buijs and a number of still to be decided French architects who were lecturing at a conference in Delft, would make an excursion to Van Nelle. “Combien y a-t-il dans le monde modern qui puissant rivaliser avec l’usine Van Nelle?”, said Le Corbusier in The 8 en Opbouw after the death of Van der Vlugt. In 1930, issue 3 of Wendingen was entirely dedicated to the factory. Van Nelle also used images of the new factory in advertisements. See: https://resolver.kb.nl/resolve?urn=MMGARO01:000174520:mpeg21:a0035 or https://resolver.kb.nl/resolve?urn=MMSAEN01:000049980:mpeg21:a0050

Shortly after the factory was operational, Kees van der Leeuw left for Vienna where he studied medicine and psychiatry. He would return to NL in 1939 and started in secret plans for the rebuilding of Rotterdam. The meetings took place in The Bonbonniere, the round box placed on top of the Van Nelle office building from where one has a perfect view over Rotterdam.

Van Nelle, ultra-modern in 1930
Before and during construction of the Van Nelle factory, Kees van der Leeuw documented himself extensively. The factory had to be so ahead of its time that after 25 years, it would still be modern. The building itself should represent the modern times. He visited the US and Europe to consult the best engineers and experts in the field of building techniques, efficiency, the newest ergonomic theories, listened carefully to the feminist movement’s arguments – most of the Van Nelle employees were female – visited Behrens and the Bauhaus and went to Detroit to see the Ford factory. He invited Van der Vlugt to join Jan Brinkman jr. to build the Van Nelle but not after he asked JJP Oud first, who refused.

Jacques Jongert’s work was exhibited at Museum Boijmans van Beuningen in 2012. A video of this exhibition can be seen here:  https://www.boijmans.nl/tentoonstellingen/proeven-is-koopen-jac-jongert-1883-1942