Next
ONE MORE WALL WELL DONE 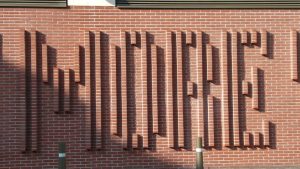 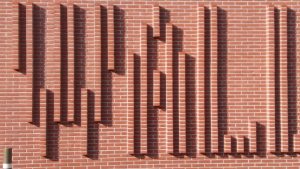 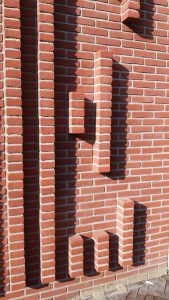 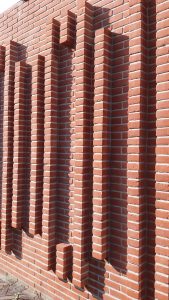 SIGN
The quote “One More Wall Well Done” appears in the play of light and shadow when one is passing by the wall. The text itself is a tribute to the making of a brick wall, the rebuilding of Rotterdam after the bombing during the Second World War, and a homage to the artwork “Wall Relief” no.1 by Henry Moore, on the north facade of the same building. The wall is 27 meter long and 3,5 meter high. Each letter is composed of bricks turned 90 degrees, sticking out 10 cm. Bricks are all 21 x 10 x 5cm. Martijn Sandberg sought for archetypes: a classical stretcher bond and where possible, letters with a serif: the E’s and L’s. See also http://msandberg.nl/text.php?kunstwerkid=407&lang=yes

ARCHITECTURE
The office building FIRST replaces the former Bouwcentrum, a post-war information center serving the booming post-war Rotterdam and Dutch building industry. This building was realised by architect Joost Boks in 1954. During the demolition the brick Wall Relief No.1 by Henry Moore composed of 16.000 hand-carved bricks was kept and carefully stored.

At the time, the sculptured brick wall was a gift from the Dutch Brick Industry and when designing the new office building FIRST, the Architecten Cie in Amsterdam had to integrate the sculpture in the new design. In addition, the artist Martijn Sandberg has realised “One More Wall Well Done” on the southern facade.

The office building First is located on a prominent location in Rotterdam: opposite to the new Central Station and the post-war Groothandelsgebouw. The site borders onto the Central Business District as well as the 19th century residential district of the ‘Old West’. The complex comprises a rectangular base block of 35 metres tall with a tower of 130 metres. The transparent plinth hosts entrance lobbies, a restaurant and an art gallery. Continuing this plinth on the east side, a fully glazed conservatory connects to the existing buildings. This serves both as a windbreak and as a transparent entrance to the court at the rear of the building.