Previous Next
THE NEW LUXOR THEATER

letter details
category: sans serif except for the i and 1.
narrow or wide: extremely wide or extremely narrow/ monospaced letter
special: each letter can be rotated 90 degrees
weights: thin, bold, normal
capitals or romans: capitals
cursif or upright: upright only
closed counter spaces: never round 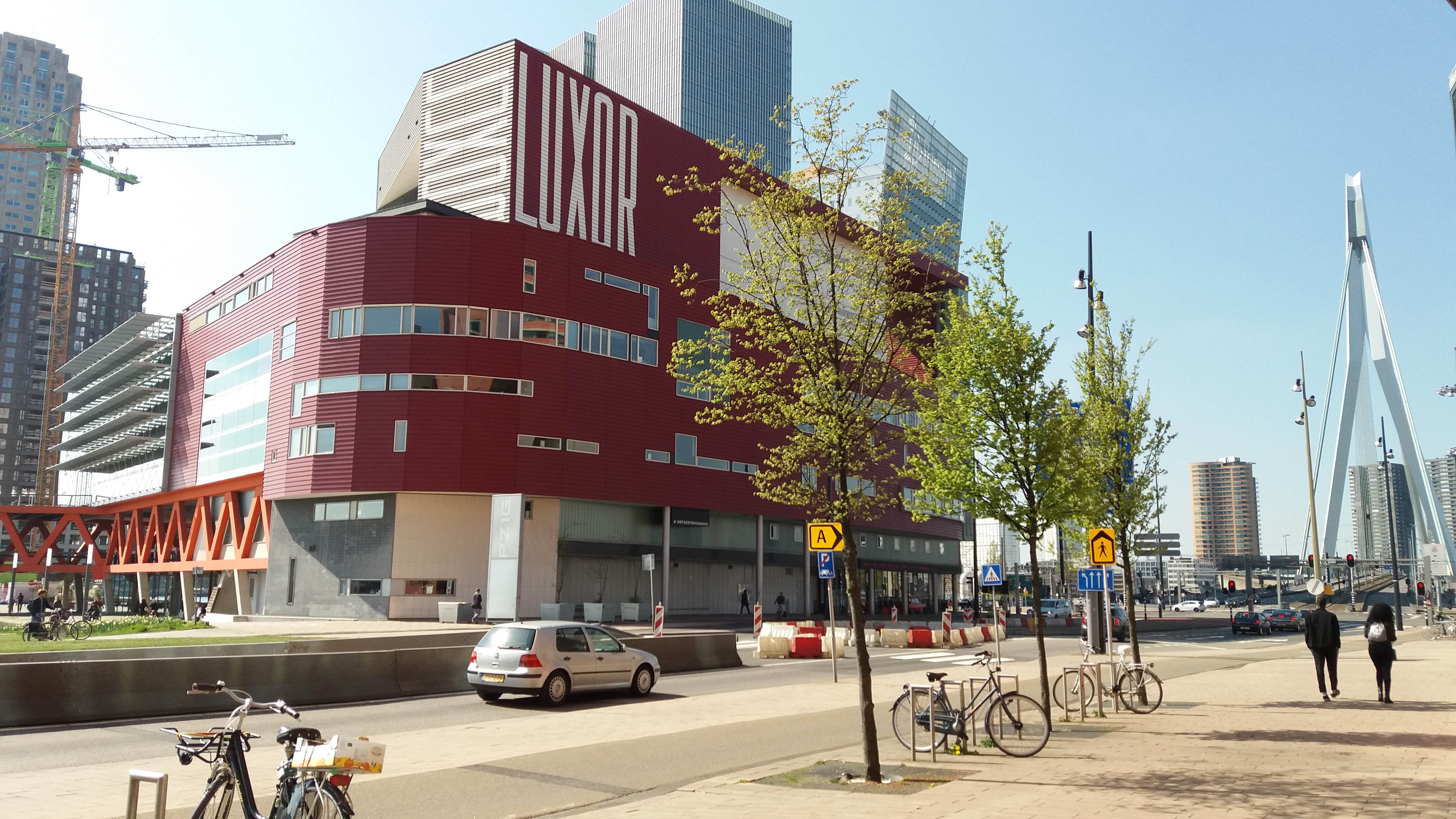 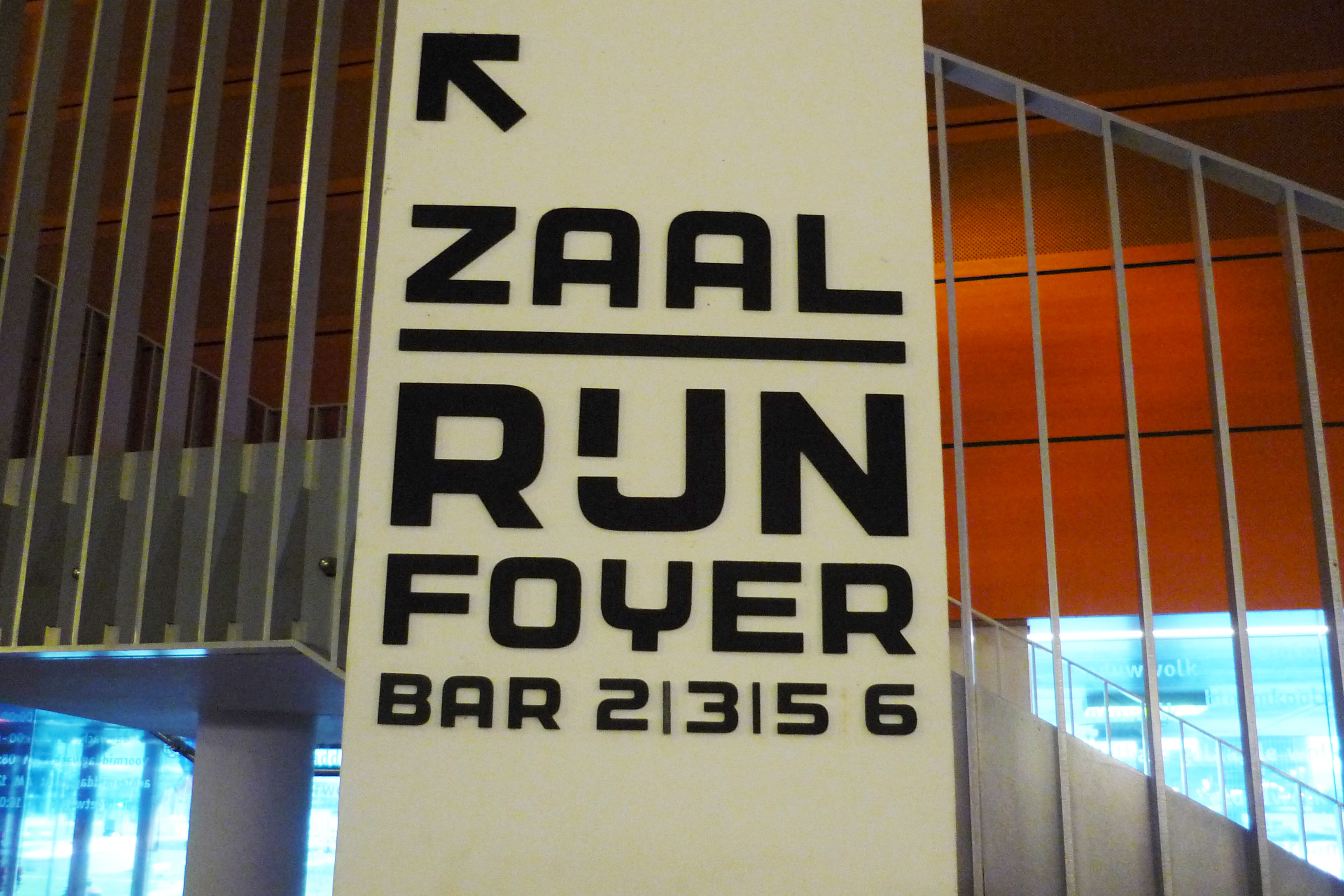 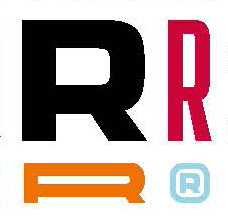 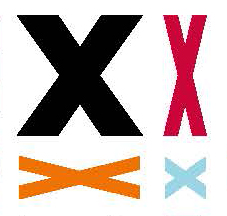 SIGN
Rob Smith, designer at L5 explains: "Our design office L5 was responsible for all communication during the design process of the new Luxor. Peter Wilson, the architect of the winning design for the new Luxor, designed the large, stretched letters on the competition design already and we, Mart Hulspas, Maurice Blok and myself, decided to develop his idea. However, simply stretching the letters does not work as stems get thinner and crossbars get fatter. We could do this better and we proposed to Peter Wilson to make a new Luxor lettering and typeface". Wilson agreed and in 1999 L5 presented the new Luxor typeface to Bolles+Wilson in Münster.

"At L5, we first tried different ways to stretch the letters inspired by the tv commercial of Stimorol chewing gum https://www.youtube.com/watch?v=_sg7SFHg7cg and we also looked at monospaced letters. Then we found titles on warehouses in the harbour of the Kop van Zuid like SUMATRA, CELEBES, BORNEO. Each letter was placed in a perfect square, so each and every letter has the same height and width: an "I" occupies the same space as the "W". We decided to combine both ideas and Maurice designed the Luxor font. A logo was not required any more, typing LUXOR was enough."

"During the meeting with the Director of the Luxor, Rob Wiegman, who played such an important role in the realisation of the building and Peter Wilson, we also made designs for the corner of the building, an eye catcher prominently visible from the Erasmus bridge and we decided to place the letters of the word LUXOR in square light boxes of 3 meters high at the corner."

ARCHITECTURE
In 1995 the city council in Rotterdam invited six architects to make a design for a 1500-seats new Luxor theatre located on the Wilhelmina Pier, Kop van Zuid, Rotterdam. For this brand-new district, Rotterdam planned a cultural landmark and renovation or rebuilding at the location of the old Luxor was impossible for urban and technical reasons. Rem Koolhaas (Office for Metropolitan Architecture), Kees Christiaanse (KCAP), Boris Sipek (Studio Sipek), Peter Wilson (Architectenburo Bolles+Wilson), Jan Hoogstad (Hoogstad Architecten) and Herman Herzberger all handed in a design.

Working at OMA at that time and having just bought a house at the Kop van Zuid, I so much hoped that the OMA's design would be the winner! The design looked like an enormous curl starting at the foot of the bridge culminating in a large theater with views over the river Maas and the city. At least, this is how I remember it. Helas, the jury assigned the commission to Architectenbüro Bolles+Wilson. Wilson knew the Kop van Zuid well as he was also one of the architects involved in the development plan of the Kop van Zuid (just like Francine Houben of Mecanoo architects who also got a commission for the Montevideo building after taking part in the same committee) and by consequence Wilson started with a clear vision on all do's and don'ts of the site.

The old Luxor theatre located Westkruiskade should have been demolished in 2001 but after two renovations: one in 2006 and one, more important, renovation in 2013, it is still functioning as a theater. It celebrated its 100th. birthday on 22 December 2017 (look at this website especially made on the occasion of this birthday showing pictures of the theatre after the bombing of Rotterdam in 1940 and of the theatre in 1920-1930).