Previous Next
M for MONTEVIDEO

looks like: De Hef, a national monument situated nearby. It is a former railway bridge by Pieter Joosting, inaugurated in 1927. Joris Ivens made a celebrated documentary about this bridge. During World War II the bridge was severely harmed; it was one of the first buildings in Rotterdam to be repaired after the war.
similars in Rotterdam: 1989, by John Körmeling on top of the first apartment building on the Kop van Zuid. 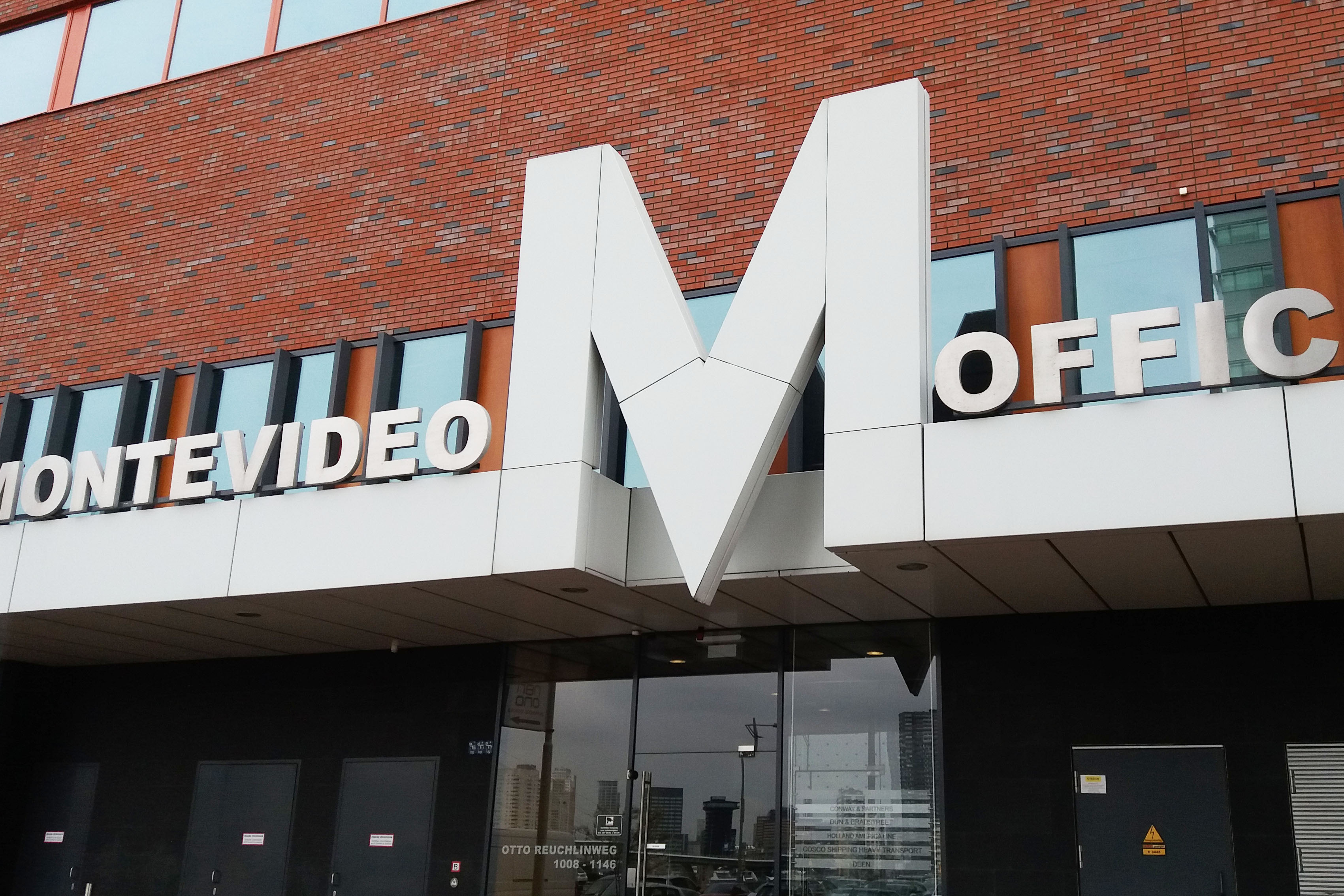 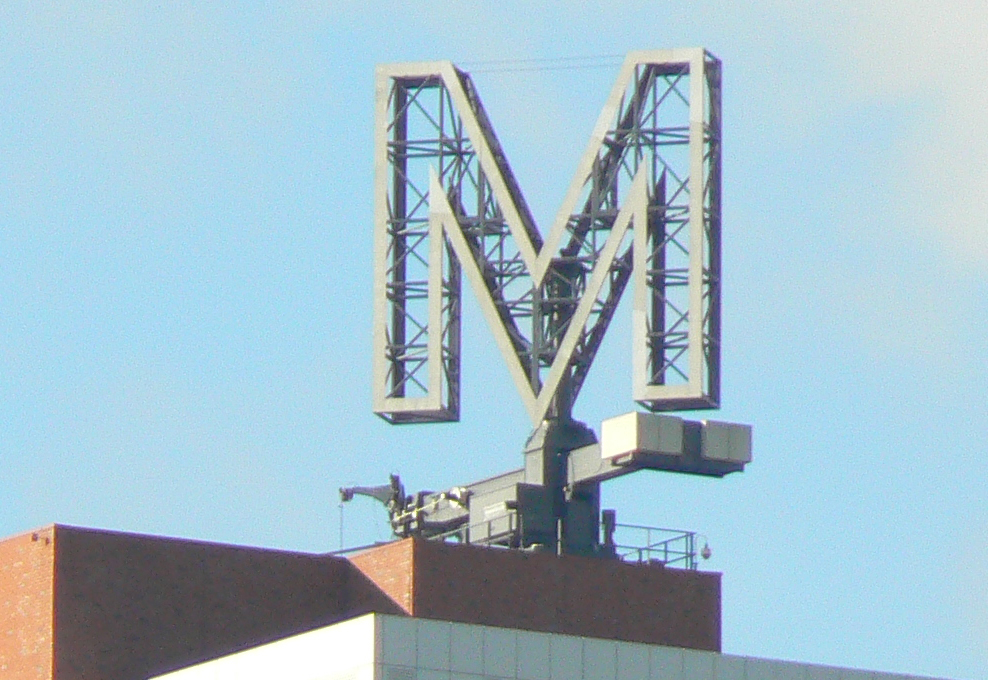 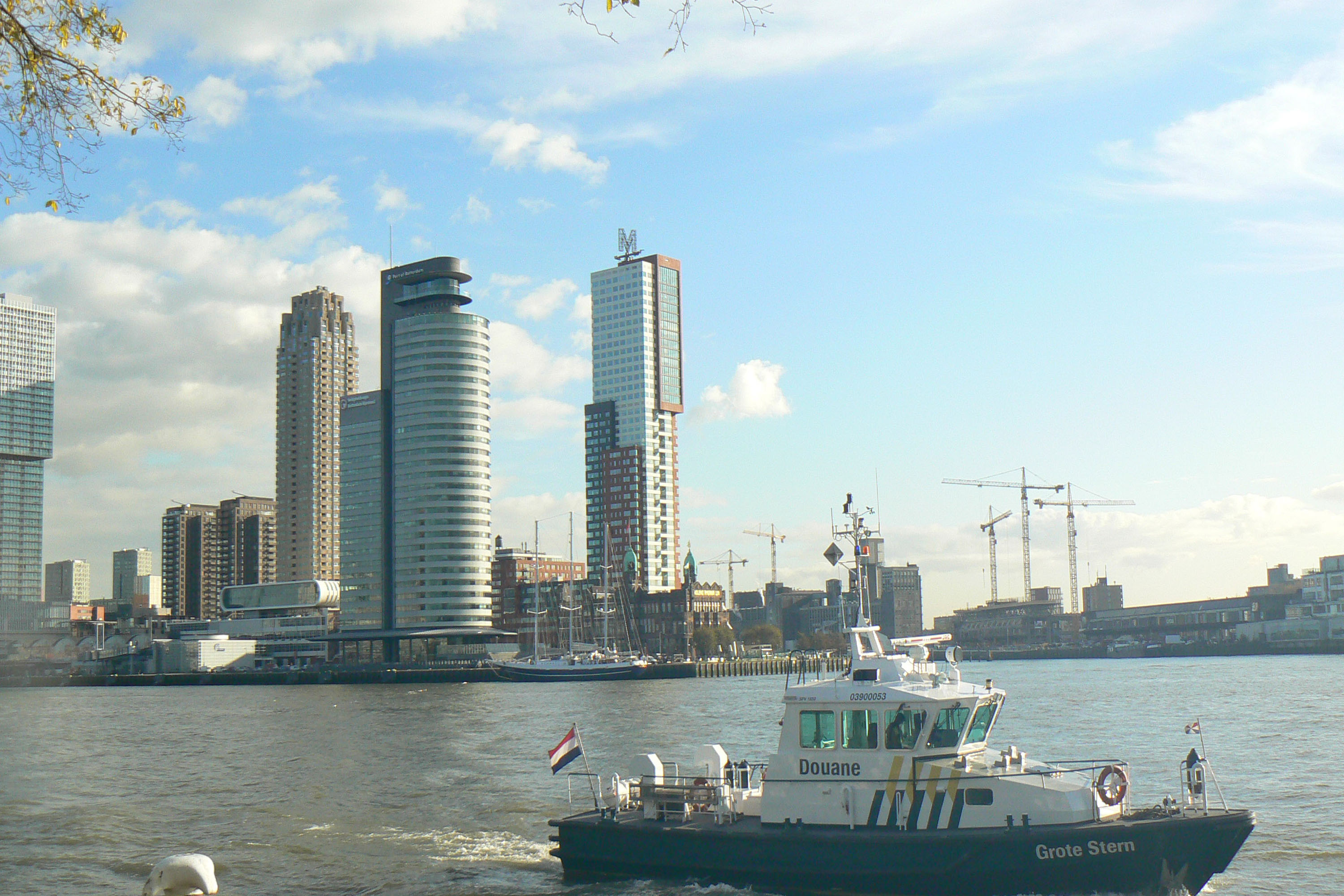 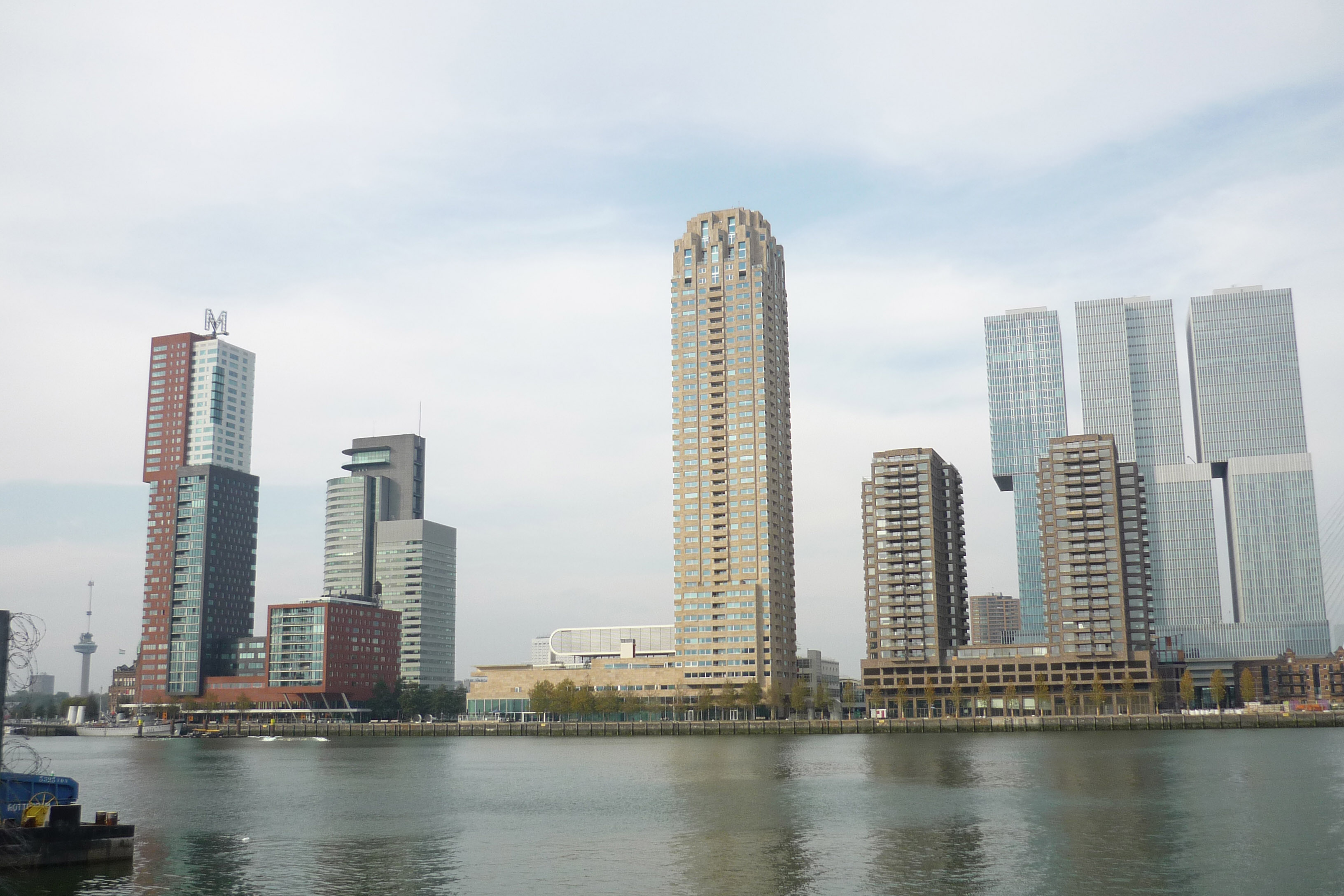 SIGN
It was Rick Vermeulen, Graphic designer (Via Vermeulen Viarick, former Hard Werken) who designed the M.
He explains: “Francine Houben, Principal of Mecanoo Architects, asked me to design a capital M on top of the Montevideo residential tower that would function as Landmark. One of the first “tall” buildings on the Kop van Zuid, also designed by Mecanoo, had a large neon sculpture by John Körmeling: ‘1989′, named after its year of construction. In this way, there would be a relation between the two new buildings situated both on the Kop van Zuid. The letter M on Montevideo should have a size that would make the tower to be the highest residential building in the Netherlands. This requirement defined the height, and as a result also the width of the letter. Design time was short, the letter had to be on the drawings in the sales prospectus: a building as a landmark is a great selling asset”.

Can you tell us more about the design process?
“I drew the capital M with a negative X-height, the vertex of the M below the baseline to enable the M to pivot and move freely with the wind. My final M design is an open construction that can survive extreme wind forces.”
And the construction?
“The first version of the M was installed on the window cleaning system and had four different positions depending on which side of the building the window cleaners were working. Since 2015, the M has a fixed position, stands on the point of the M, still moving freely by the wind.”
How did you work together with the architect?
“I got all freedom to design the landmark myself. We have worked together since long and trust each other”. [Graphic designer Rick Vermeulen made several books for Mecanoo: “Mecanoo. Francine Houben. The Master Architect Series”, 2008, “Francine Houben/Mecanoo Architecten, compositie, contrast, complexiteit”, 2001, and “Mecanoo, 25 werken”, 2005.]
Did you also work on the M at the entrance?
Unfortunately not. The M at the entrance is not quite the same as the Landmark on the roof and has been drawn by a designer at Mecanoo.
M is everywhere
The M appears everywhere in the building: a large M on the carpet in the hallway, small m’s on the glass panels at the entrance and on the carpet in the elevators, a M engraved in the entrance door and on each floor: on a red background for the lofts, on a yellow background for the sky apartments, and on a blue background for the city apartments.
ARCHITECTURE
Until the realisation of New Orleans in 2010 (160,5 m tall, designed by the Portugese architect Álvaro Siza, a residential tower next to Montevideo), the tower was the tallest residential tower in the Netherlands, thanks to the M.
context
In 1999, Mecanoo dressed up guidelines for the south quay of the Wilhelmina Pier: no monotonous repetitive facades, an inviting street level and flexible floor plans for living and for working.

Not much later, Mecanoo got the commission to design a residential tower. Francine Houben invented the name, Montevideo, referring to the former warehouses on the quay with names of ports like New Orleans, Santos, Baltimore and Havana. Montevideo, another large harbor city in South America was chosen for its romantic exotic connotation. The M on the roof stands for Montevideo of course, but also for Maritime, and river Maas. Together with the World Port Center by Sir Norman Foster, from where is taken care of the port and industrial area of Rotterdam as well as the handling of shipping, Montevideo is a gate keeper of the Wilhemina Pier.

variety
Variety is the key word. The building is composed of different intersecting volumes each in a different colour. One of the volumes cantilevers 16 meters above the quay and hosts restaurants on the ground floor. Different construction methods (concrete and steel, allowing for 192 apartments with 53 different ground plans, different heights and facades.

inspiration
Inspiration came from the brownstone warehouses in the US and the ocean steamers of the Holland-America Line that are little towns in themselves. The ships had all kinds of services on board, had a number of stacked decks and had cheap as well as very expensive huts. Imagine that emigrants from the Netherlands, from Germany, from Europe, travelled to Rotterdam, bought a one way ticket to America to build up a new life and departed from this very Pier.