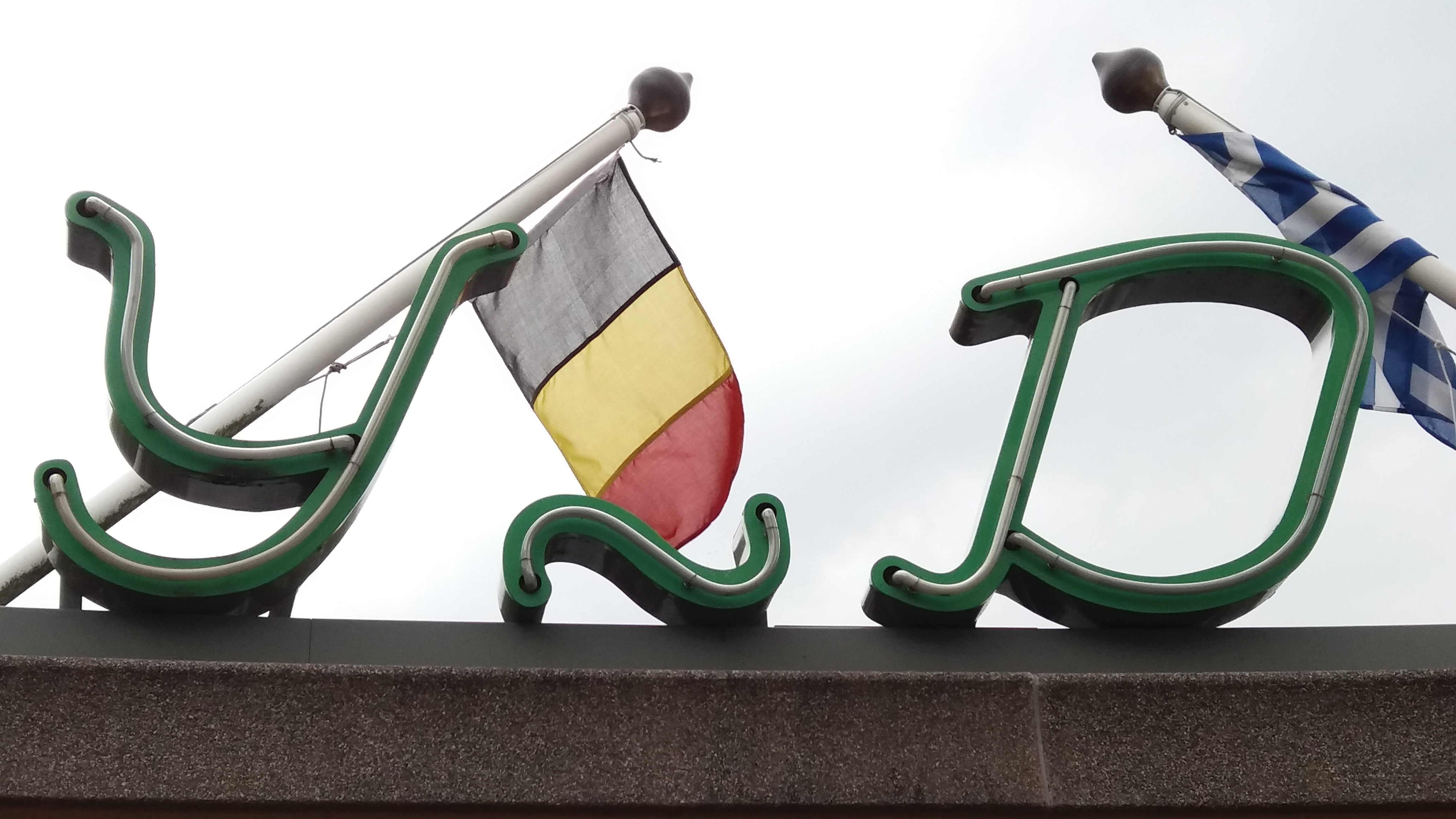 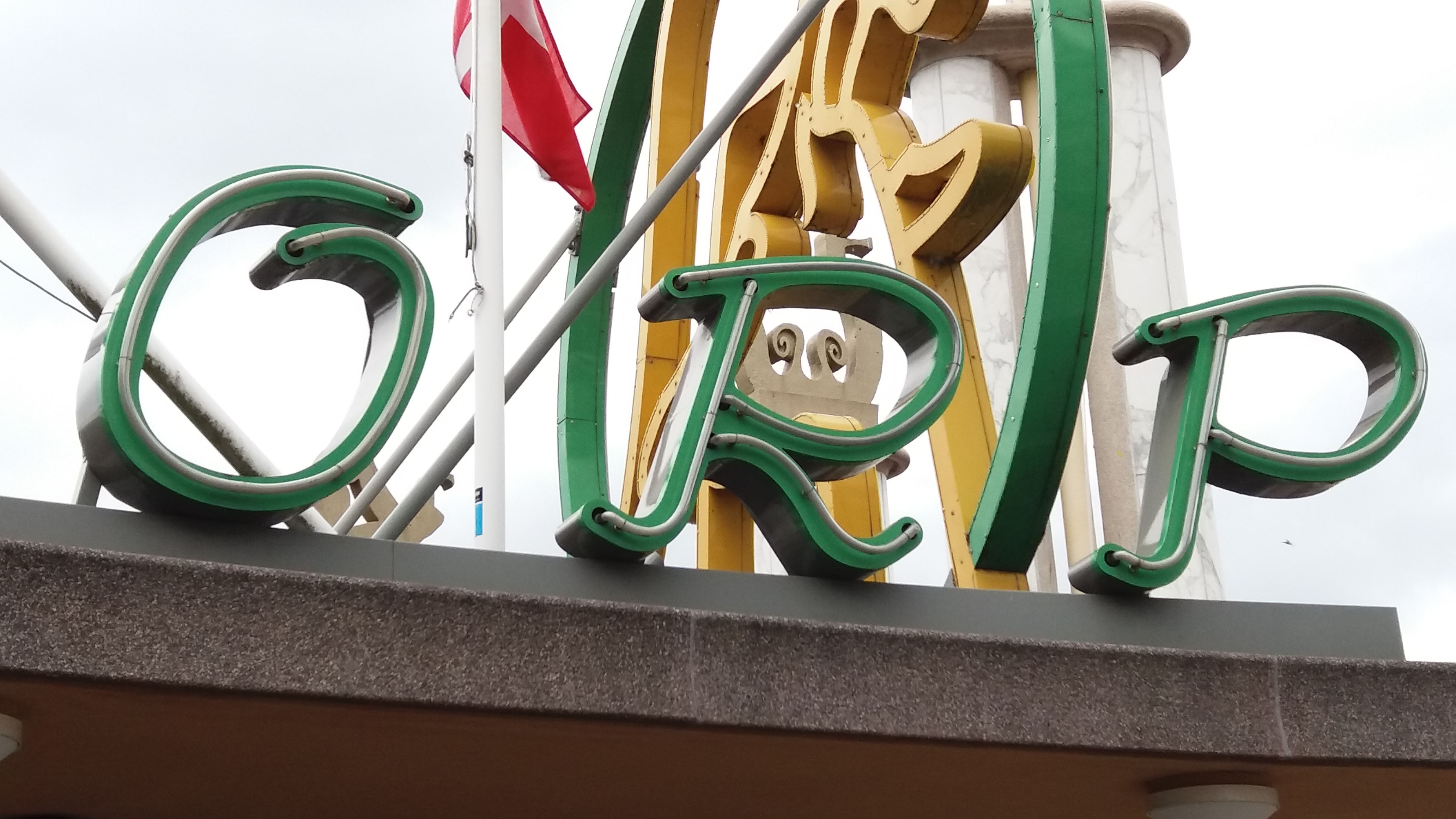 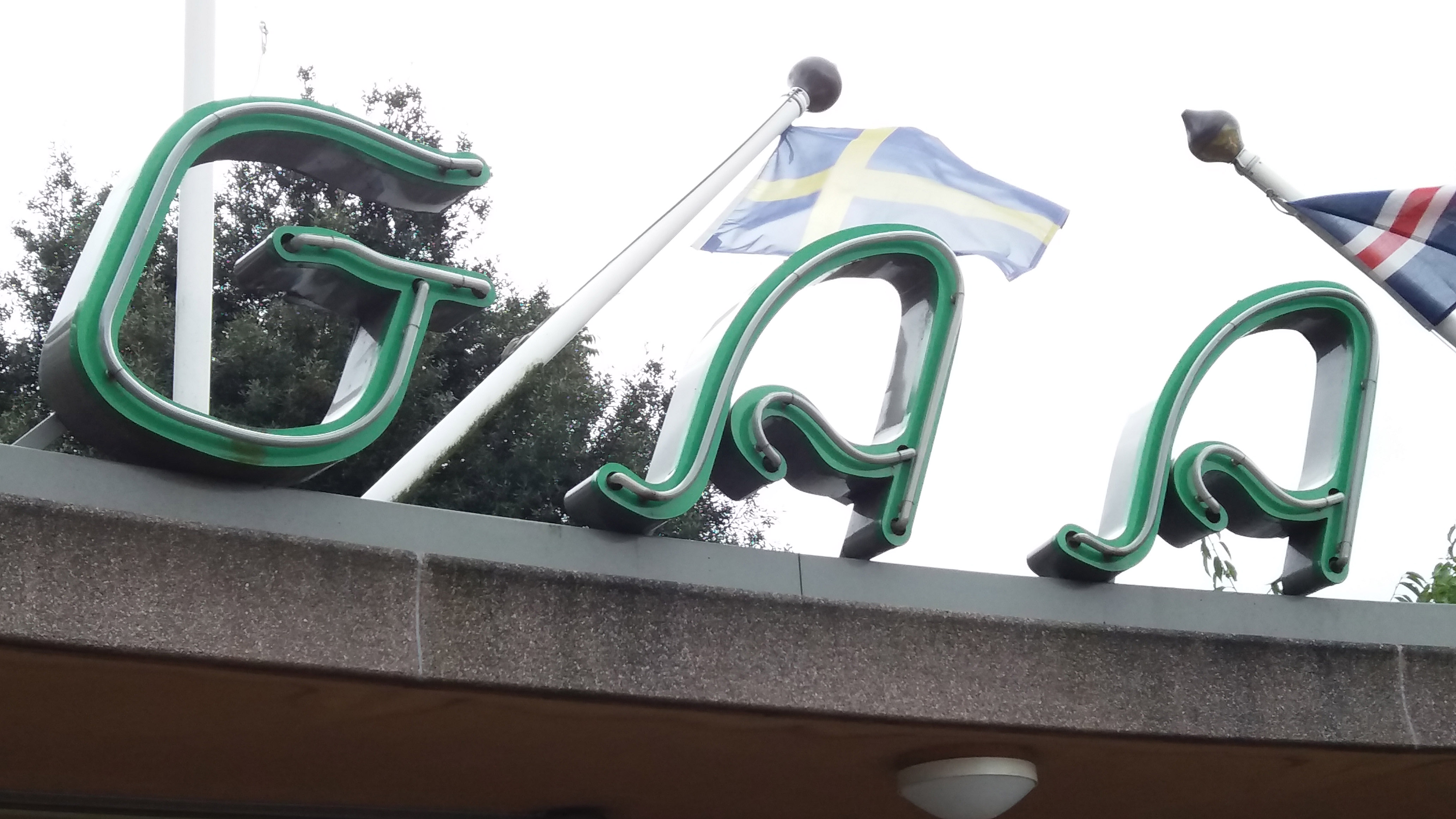 SIGNS
Mosaic pavement at the entry of the Riviera Hall. Ravesteyn designed the Riviera Hall to attract visitors during winter time. The name was carefully chosen and alludes to the, at that time, chique imago of the cities of Cannes and Nice at the French Riviera. The mosaik is a round emblem with the letters DB (Diergaarde Blijdorp) in red mosaic stones. You walk right over the emblem when entering the Riviera Hall. The emblem is repeated throughout the park: in forged iron in the fence, and used as ornament in the windows inside the Riviera Hall.
The neon lettering at the entrance has also been designed by Van Ravesteyn. The script letters Diergaarde Blijdorp look unusual: almost all strokes are curved and wavy, not calligraphic at all. He used the same language for an emblem, a bench, a curved roof top of an animal enclosure as well as for the curves of the Riviera Hall.

ARCHITECTURE
Sybrand van Ravesteyn has designed the Blijdorp Zoo as a fantasy park. He designed all elements: from extra small to extra large: emblems, mosaic ceilings, fences, benches, wooden holding rooms, watch tower, large animal enclosures, garden plan and park layout. He used modern new materials: steel, concrete, glass, and combined it with a frivolous curl, neo-classical statues and decoration wherever he thought the eye would need a piece of art. Of course, he encountered the critique of his fellow architects – straight forward adepts of the modern movement of pure functionalists.

Blijdorp Zoo has been recently renovated, large new artificial ecosystems have been added to create a better environment for animals and a more attractive park for visitors. In 2007 the zoo was declared a National Monument and restoration of the “old” part of the zoo designed by Sybold van Ravesteyn started. In the meantime, some elements designed by Van Ravesteijn had already been demolished like the watch tower – the eye catcher of the park but considered too dangerous.

Great stories exist in Rotterdam about the animals of the zoo during the bombing of Rotterdam in the second World War. The zoo was under construction in 1940 but not ready yet. All animals were still in the old zoo located in the city center. The fires caused by the bombs also reached the zoo and the smaller animals were quickly set free, escaped, wandered freely in the streets of Rotterdam or were swimming in the canals nearby. As a procaution the wild animals were shot. Many animals were relocated to the new zoo. On 7 December 1940, Blijdorp Zoo was officially opened.