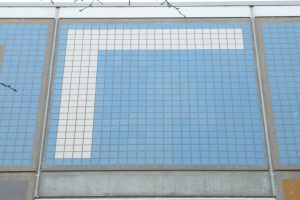 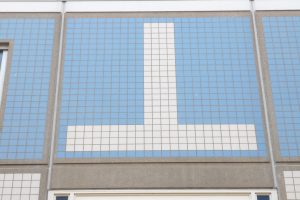 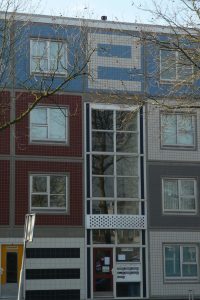 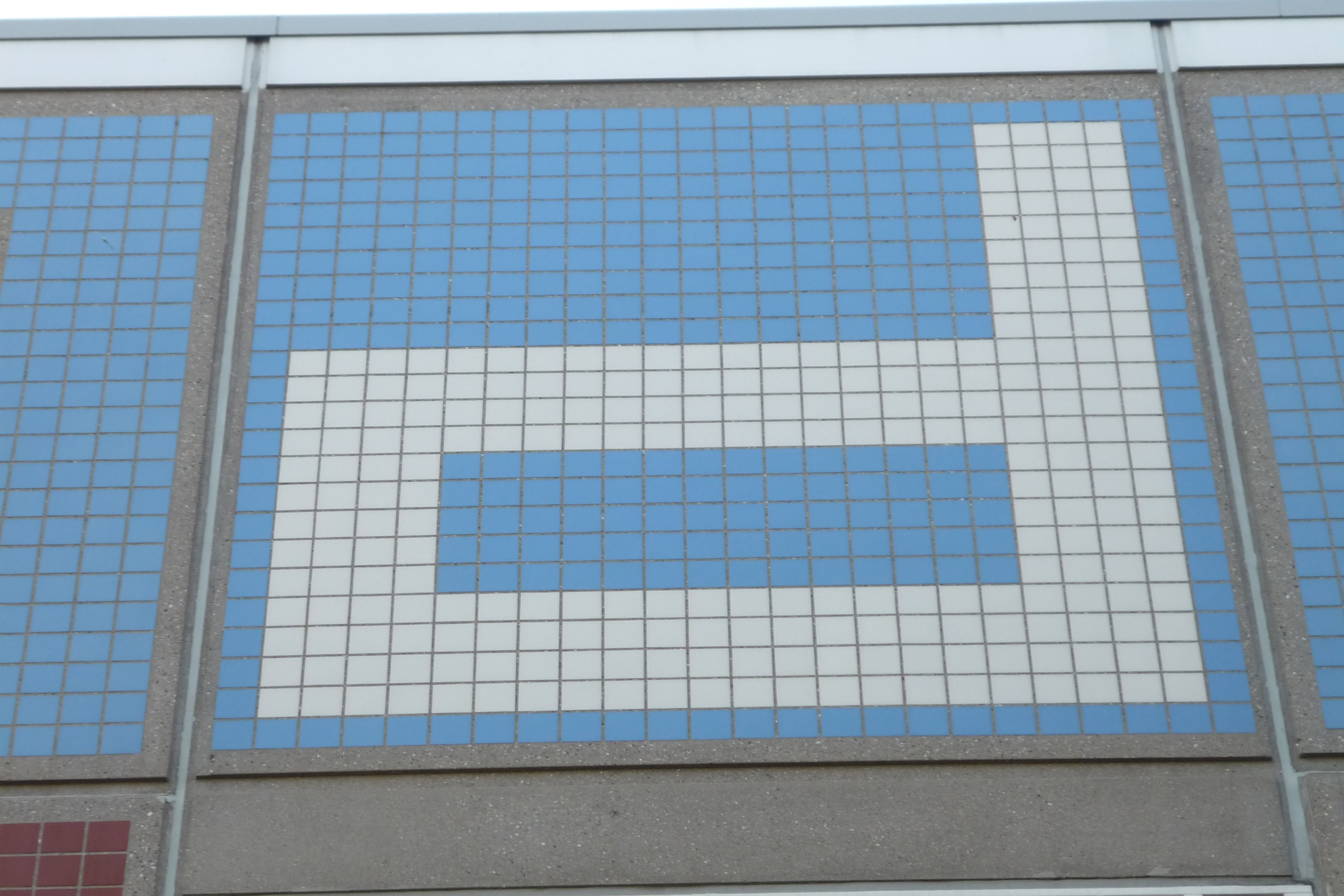 SIGN
The sign PAPERKLIP ANNO 1980 is made with white and red square tiles. All letters fit into a square of 24 x 24 pale blue tiles, all strokes are 4 tiles wide. A border of 1 tile is kept free around the letter. In contrast to the letters, the numbers are red instead of white. The counters are 5 tiles wide and 14 tiles tall; the apertures also are 5 tiles wide. The sign is placed as a frieze on the south facade only.

Carel Weeber said: “I designed the letters myself, a hobby, next to designing interior and furniture. The lettering took place more or less by accident when I was drawing the 500 m. long facade. All facades of this building are built from prefab concrete elements of approximately 270 x 270 cm and the double fired tiles of 10 x 10 cm. were cast in the prefab concrete itself. The number of tiles was fixed per letter: they simply had to fit in the square of 48 tiles. As the lettering was also done in the concrete factory, it didn’t add any costs.”

ARCHITECTURE
With this design, Carel Weeber made a statement against the “neo-truttigheid”, the pettiness of the residential housing (cauliflower districts) and the cult of individuality of the 70-ties: he designs a uniform superblock.
The building is 500 meter long and has a 4 storey-high middle part. It has round corners, it is 8 story-high on the south side and on the north side 6 storey-high. The skeleton is made of in situ concrete and the facade has a sober, rigid grid of prefab concrete elements with glazed tiles in white, grey, red, pale blue and yellow ochre each with a window and a balcony (on the north side) placed in the middle.

The portico apartment building hosts 549 apartments (2,3,4 or 5-rooms, for low incomes). The floorplan looks like a paperclip but the name refers to the small and fast sailing vessels (klippers) transporting pepper and other spices that were stored in the warehouses of the Rotterdam harbour in the late 1800’s, early 1900’s. The building was one of the first residential projects in the area that would become part of the large redevelopment plan of the south of Rotterdam (Kop van Zuid) in 1984.

In the early 80’s, Rem Koolhaas and Carel Weeber were both teaching at the TU Delft: Carel in fur coat and sunglasses, Rem in straight legs and with American style slick back hair. Both anti.