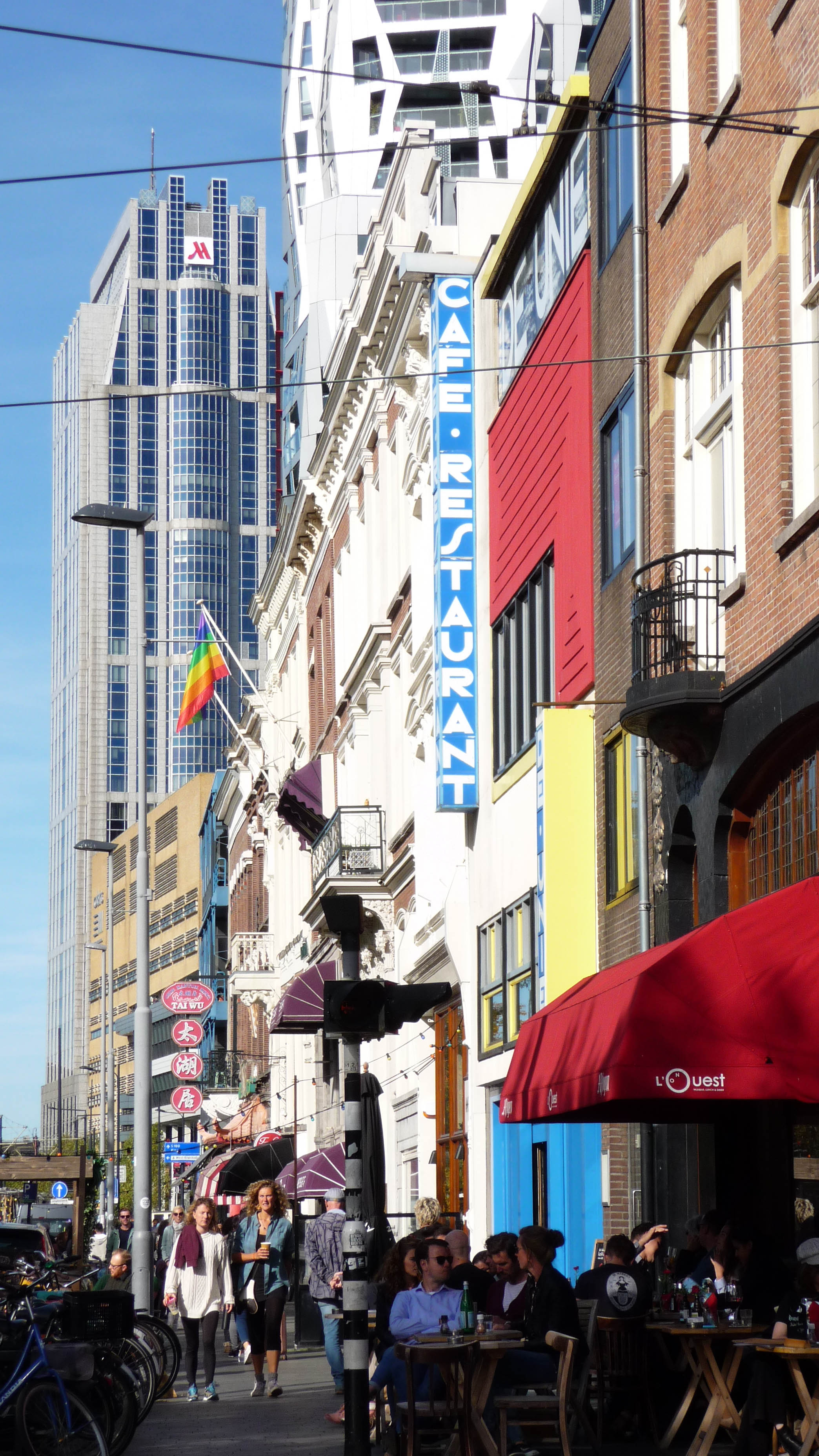 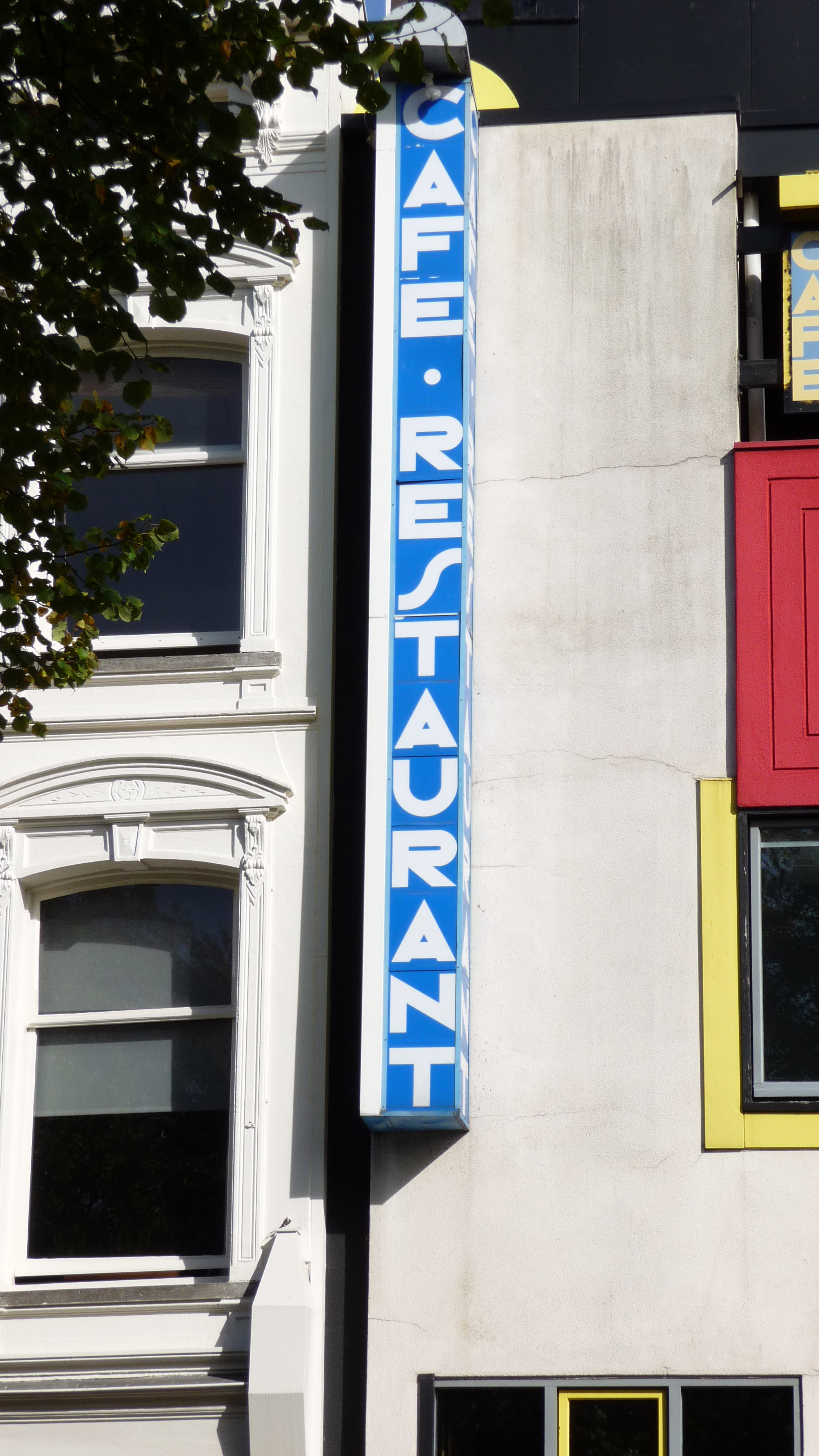 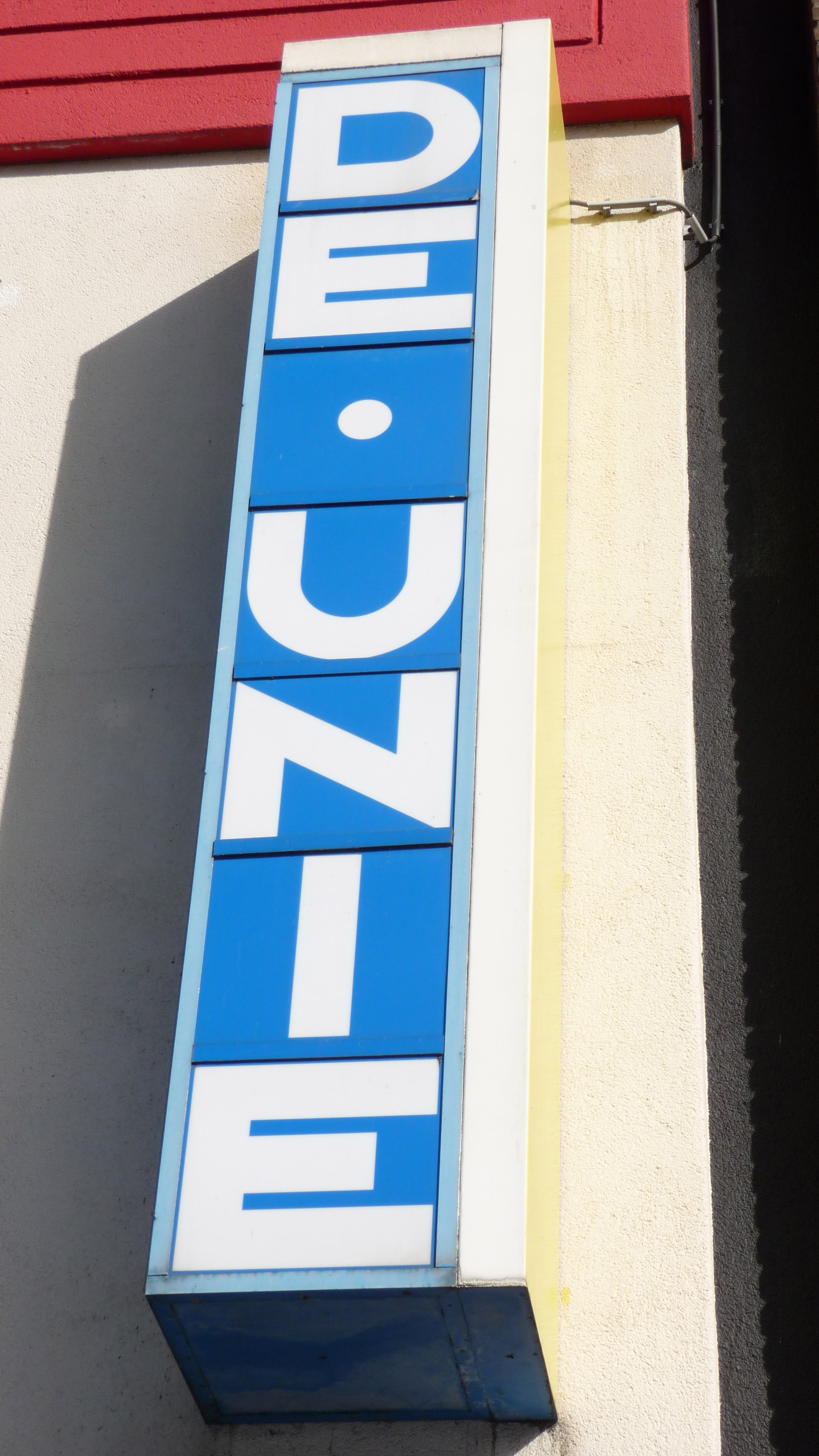 ARCHITECTURE
Café De Unie designed by JJP Oud (1890-1963, Purmerend) belongs together with the Rietveld-Schreuder house by Gerrit Rietveld in Utrecht, to the canon of De Stijl architecture. It was built in 1925. Café De Unie was initially located on Coolsingel, from 1907 until 1939 and nicknamed Calandplein because of the monument that was placed here for Pieter Caland, the engineer of the Nieuwe Waterweg, starting point of Rotterdam as world harbour. It was a prestigious location and De Unie was considered by many inhabitants of Rotterdam as a striking dissonant in between two beautiful classical buildings. Café De Unie was destroyed during the bombing of Rotterdam in May 1940.

Oud was able to build De Unie on condition that it was only temporarily and that the building was to last for just 10 years. This allowed him to experiment while working on more serious residential projects like the 41 social housing units in Hoek van Holland (1924-1927) and the 291 social housing units in Rotterdam Kiefhoek (1925-1930). He himself has called Café De Unie “this simple thing” (dit simpele geval).**

A beautiful collage made by Oud can be seen in the archives of The Nieuwe Instituut in Rotterdam. Carefully outlined with pencil, each letter is painted white by hand. The neon signs are made separately and glued on the collage. 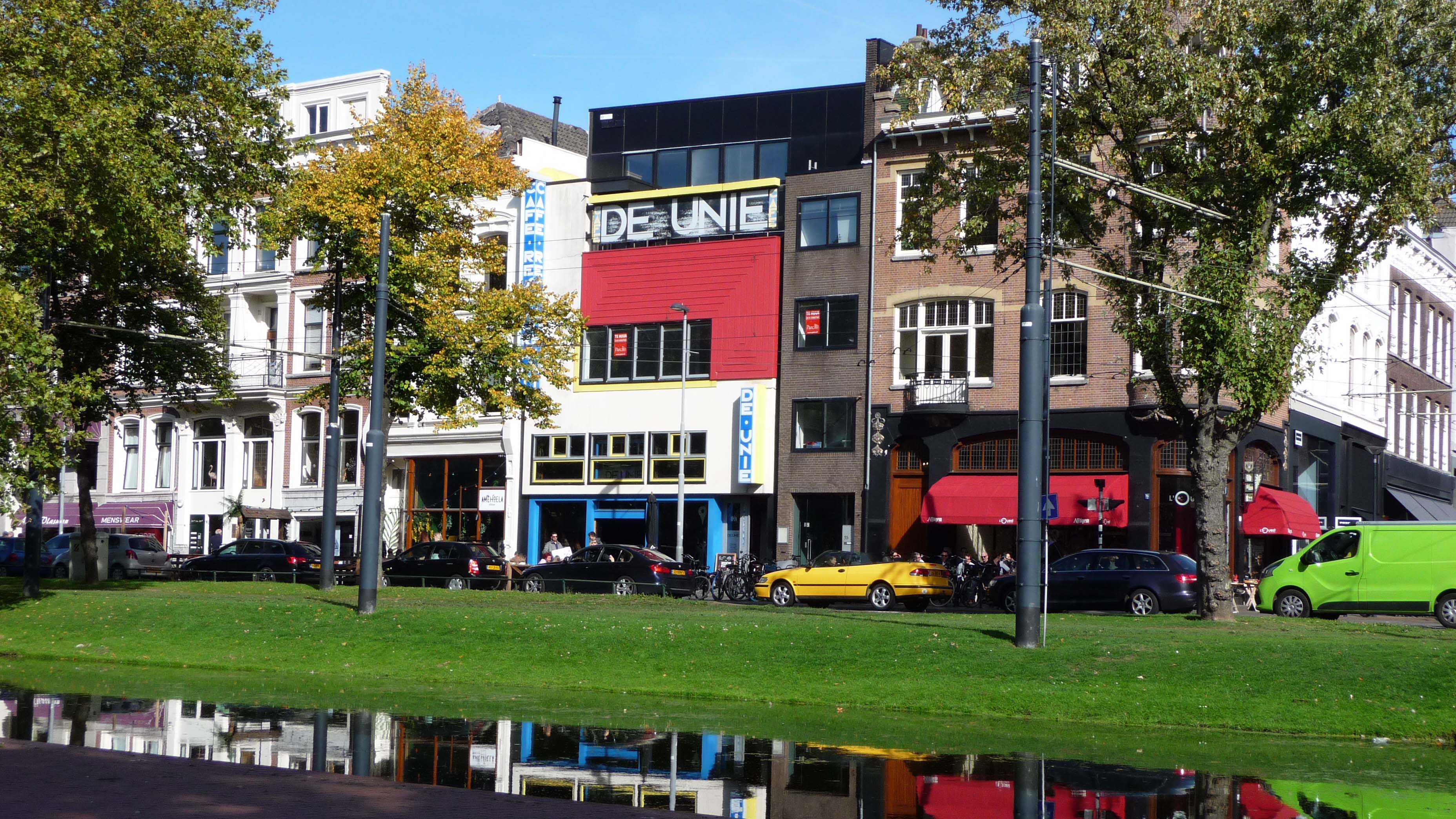 DE STIJL
During the Great War (1914-1918), the Dutch were neutral and artists in Holland were able to develop, earlier than in the rest of Europe, new ways of thinking about art, architecture and typography. There was a shared sense for renewal fuelled by technical innovations worldwide and an intensive international exchange of new ideas using small artists magazines, extended correspondence and, after the war, frequent visits of European avant-garde artists. They all felt that a new era had started, hence an end to everything of the previous century: 19th. century baroque, ornamental architecture and figurative painting! An end to what Jan Tschichold called, in the same year as The Unie was constructed, “Die alte Typographie”! Earlier, in 1923 at the occasion of the Weimar Bauhaus exhibition, Moholy-Nagy, Head of the print studio, also stated: “Die Typographie ist ein Instrument der Mitteilung. Sie muss eine klare Mitteilung in der eindringlichsten Form sein”.

In the magazine of De Stijl, under the guidance of Van Doesburg, theory and work of painters like Mondriaan, Van der Leck, Huszár as well as architects like Oud and Wils were published,  also European artists were shown. An international small group of avant-garde artists tried to formulate a coherent theory for the style of this new era. Futurism from Italy was embraced, the speed of the plane and the locomotive, the idea of Grossstad, the city of Paris with its neon lights, its busy traffic, the playful typography of Dadaism, the architecture of F.L. Wright in the US and of course, also the constructivists at the Bauhaus. The new plastic arts had to be autonomous, abstract and universal with straight lines, in primary colours, asymmetric, without any decoration and made with mathematical precision. In 1917, the first manifesto of the Stijl had 8 rules. Rule no. 1: “There is an old and a new consciousness of the age. The old one is directed toward the individual. The new one is directed towards the universal”, and rule no. 4: “The new consciousness is ready to be realised in everything, including the every-day things of life.” It is the ideal of a new collective – architects, designers and artists – all working together in the new style, Neo-Plasticism or Nieuwe Beelding. 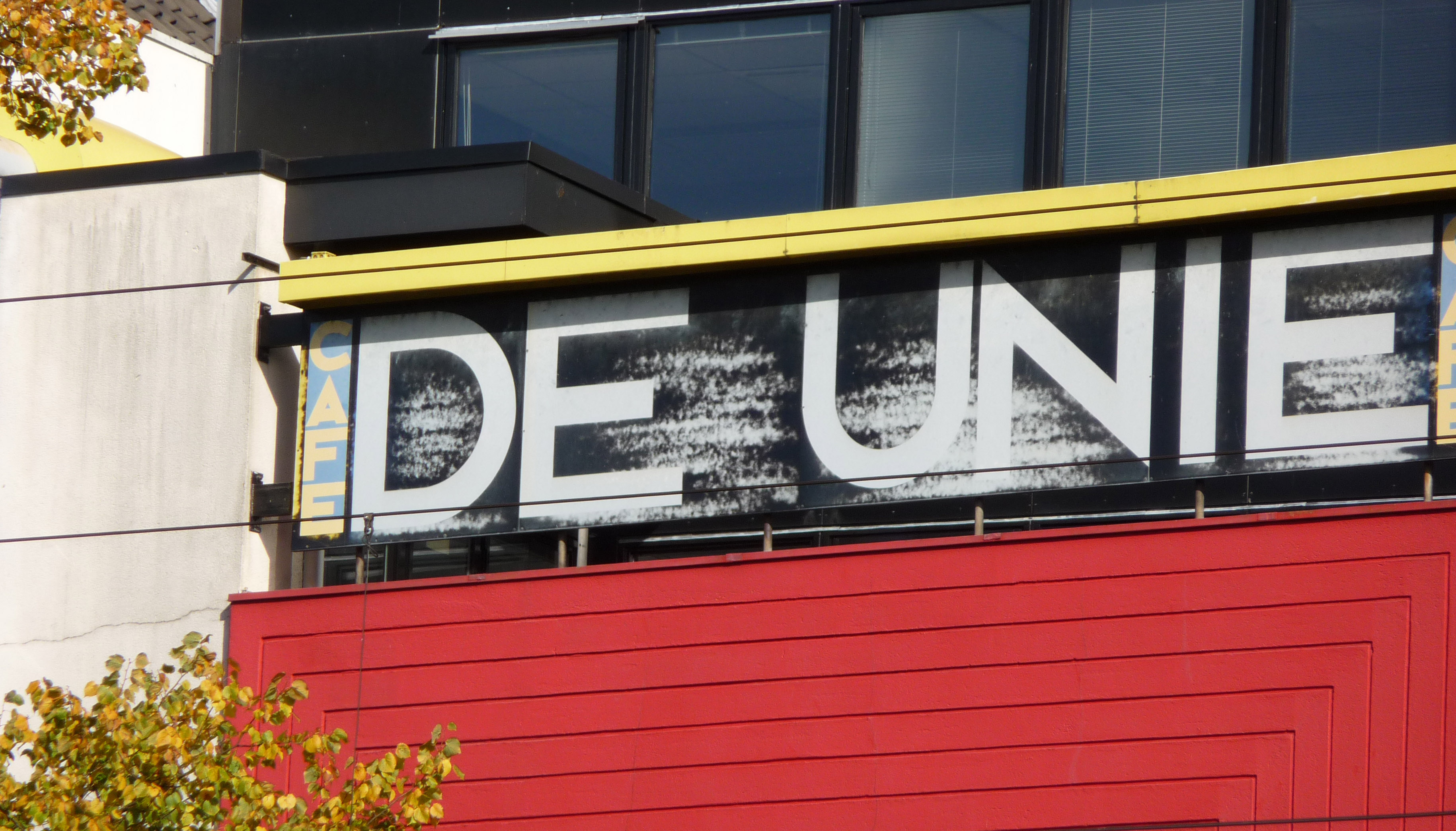 SIGNS
So, the signs drawn by J.J.P. Oud for the facade of his Café were in capital letters, sans serif, without contrast, hence international and universal, without ornament and without any reminiscence to calligraphy. The Stijl magazine sets the standard: its front page designed by Van Doesburg for the first issue, showed just black capitals and later, in 1921, red and black sans serif capitals only. Puzzling for me is the use of the red dots in between the words café  and restaurant. Where do they come from? They are not used in any of the Stijl magazines. Answer seems to come from El Lissitzky who was in NL in 1923 and gave a lecture on the new Russian art  in the Haagse Kunstkring. He published his innovative typography in “Voor de stem” (1923) and “Pro 2 kwadrats” (1922), the latter published in De Stijl.

Publicity and neon signage were part of this new world and admired by members of the Stijl and the Bauhaus. It is difficult to imagine that at the time, neon signs were very scarce in Rotterdam, in München they were even forbidden in 1925, the year De Unie was built. In the Stijl magazine, examples of signage or publicity stands made by Dutch and Bauhaus artists were published together with manifestos about the new art, poems typed as if it were Mondrian paintings, and newly designed architecture.

Oud writes in Bouwkundig Weekblad 46 (1925) 31: ….”I’ve decided to let the Café be a Café, a place to eat and to drink, using all relevant and proper means like neon signs, signage, form, colour et cetera, to attract as much as attention as possible. Not afterwards but composed in advance to form a whole …and with a purity of intention that cannot be denied…” (vertaling MvdB).

Kees Broos, in “Mondriaan, De Stijl en de Nieuwe Typografie” points out that most of the architects of the Stijl and the Bauhäusler after them, used to design ‘on grid’. In 1919 Van Doesburg finished Architype, based on a 5 cm x 5 cm grid. Interesting examples are the logos designed in the early periods of the Stijl: Van Doesburg made a logo for Oud (see below), Vilmos Huszár made a logo for the Stijl and Piet Zwart made a beautiful logo for the architect Jan Wils. The big red l-shaped painted surface in the facade of De Unie fits into this imagery just like its colours and other elements fit into a Mondrian’s Tableau. This wooden autonomous element, just like the neons with their blind yellow sides and the horizontal yellow cornice, isolate the building from the neighbouring classicist buildings, underpinning the neo-plasticism of De Unie as well as it advertises the Café. 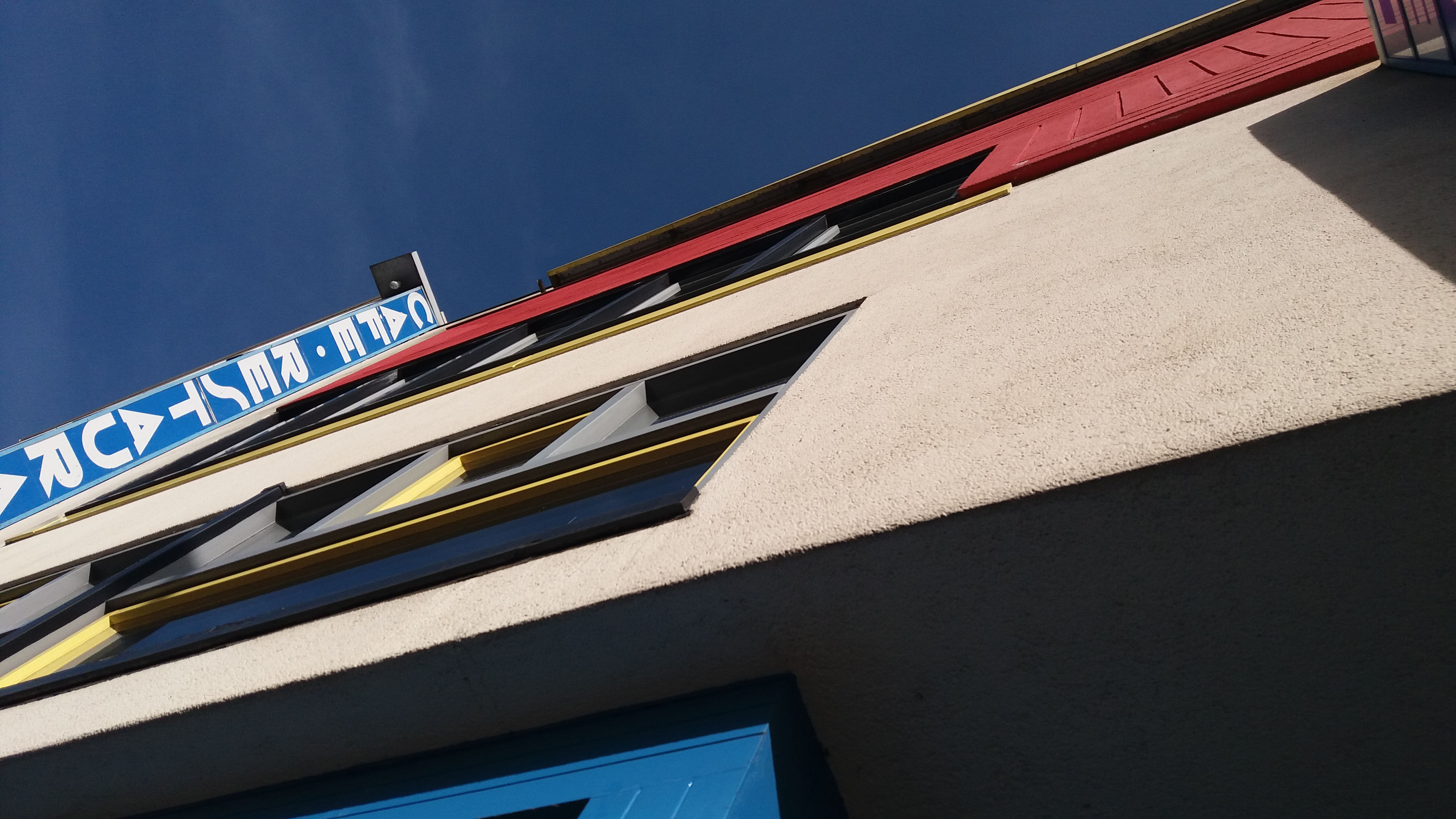 REBUILDING DE UNIE
The Unie was initially projected on the Binnenweg next to other cafes and restaurants but inhabitants protested against it: it was too strict and absolutely not “gezellig”.  A new home for the Rotterdamse Kunst Stichting (Rotterdam Art Council) was a good reason to rebuild De Unie. It is not very clear who exactly initiated the reuse of Oud’s ‘frivolous intermezzo’ as he once called his own design for The Unie, at this specific site. Some say it was the developer Lisman Inter Holding who financially supported the enterprise, two top officials from the City of Rotterdam (Volkskrant, 13-08-1985), or the Rotterdam Art Council itself. In any case, on the drawings by Carel Weeber, who was the architect of the relocation, both Lisman and the City of Rotterdam are mentioned as clients. (Het Nieuwe Instituut WEEB_935-3/935-1)

The facade designed by JJP Oud however, did not fit the facade of the new building that hosted not only a café but also a small lecture room and offices. Weeber decided to keep the original dimensions of Oud’s facade. His solution was a setback of the third and fourth floor, to make an abstract black background for the sign of DE UNIE, and he added a two meter wide entry zone to fill up the two meter vacant space left between the facade and the adjacent building. Still, when interviewed in 1986, Oud’s spouse Annie Oud-Dinaux said that her husband would not be pleased because “they cheated too much” and Bernard Hulsman in NRC of 2 March 2002 said that the actual cafe De Unie is a good example of “a decorated shed” as mentioned in the architectural bible of the 80-ties “Learning from Las Vegas” by Denise Scott Brown and Robert Venturi.

It is not unusual to rebuilt lost architectural modern monuments in a different location at all. Renowned iconic examples are The Barcelona Pavilion of Mies van der Rohe, rebuilt on the same site, L’Esprit Nouveau pavilion of Le Corbusier for the World Expo in Paris, rebuilt in Barcelona and Sonsbeek pavilion of Rietveld, rebuilt in the sculpture garden of Kröller-Müller (Carel Weeber in an interview with Hans Ibelings in HP of 30 augustus 1986.)